Professional football players’ biggest foe isn’t the player on the other side of the line, but the rapid pace at which their athletic careers expire. Over stops across three different leagues in the last 18 months, free-agent wide receiver Donteea Dye has recognized the uncertainty of his career and necessity to simultaneously prepare for life after football while training to compete at the sport’s highest level.

Dye, a graduate of NCAA Division III Heidelberg University, wasn’t highly recruited out of high school but caught the eye of NFL scouts. Posting impressive combine numbers, he signed with the Tampa Bay Buccaneers in 2015. Dye moved from underdog to one of the 1.5 percent of NCAA football players who make it to the NFL.

Due to the demands placed on them by their college programs and own athletic focuses, many NFL players graduate college without having completed internships. Recognizing that this experiential gap is problematic for NFL players seeking post-playing career employment, the NFLPA developed an externship program for active and former players. Over the last seven years, 243 unique players — including Dye — have completed over 278 externships with 56 different companies.

“One of our goals at the NFLPA is to start equipping active players with opportunities, tools and resources to set themselves up for what they want to do after football,” said Connor Ford, a player manager at the NFLPA. “Some of our guys come in with specific interests in mind, and they can use these opportunities to progress. Others are very open and just know they need to get experience. This becomes a program for them to narrow career interests and identify career paths to come up with a plan for what they want to do.”

Once Dye’s rookie season began, his mother, Lamonda Dye, asked about his offseason plans. Lamonda had always told her son that if he didn’t attend school, he couldn’t come back home.

“She was always somebody who pushed the issue that football isn’t forever,” Dye recalled. “I got to my rookie year, and she pressed what I would do during the offseason. I told her it was my first offseason and didn’t know. She told me in my second year I had to look ahead.”

“We try to make this as real world of an experience as possible,” Ford said. “We do an initial screening internally, then lean on our partners to do their own screenings and get plugged in.”

For free-agent wide receiver Charles Johnson, an opportunity to gain experience with NFLPA externship partner Fanatics led to turning down an opportunity with the XFL. Johnson was a seventh-round NFL draft pick in 2013 and who spent five seasons in the NFL, including three playing for the Minnesota Vikings. He spent in 2019 in the Alliance of American Football, and when it filed for bankruptcy halfway into its inaugural season, Johnson realized it was time to reevaluate his future.

“I had a lot of success in the AAF and got on with the (Philadelphia) Eagles, but ended up getting injured and went on injured reserve,” he said. “Once the XFL started up, a lot of teams and players were calling me saying they need me. It was very tempting. I still love football and it’s something I want to do, but I had to step outside of my competitive self and ask what is going to be beneficial for me and my life at this moment.”

The XFL calls began when Johnson had already been accepted to Fanatics’ externship program. Enrolled in courses to complete a masters in business at the Indiana University, Johnson entered the program with the sports retailer hoping to learn the business skills he’d need to open a training facility in Kentucky.

“I told the XFL I’m not missing this opportunity,” Johnson said. “The last few years, dealing with injury and how my career went, I have been thinking about the transition from football. I wish I started earlier and gave it deeper thought. As an athlete, football is your whole life and that next step can be intimidating. I know nothing else but football, and it doesn’t really translate into the real world.”

Despite being steadfast in his decision to pursue the Fanatics externship, Johnson says the choice didn’t come without concerns.

“The hardest thing about transitioning from football is it is all foreign territory,” Johnson said. “This is what I’ve done for freaking a lot of years. I don’t know what else to do. It is intimidating to think football is done and I have to go to work, which is fine with me, because I grind. But it’s like, what do I do? Playing football for a long time isn’t going to help me build software. It’s intimidating going into an interview, because all you have done is play football, even though you have a degree.”

During the externship, Johnson received mentorship, camaraderie among other NFL players navigating transition from football, and instruction on critical elements of business — like financial forecasting and developing marketing plans. Johnson also walked away with newfound confidence that he can succeed outside of football, too.

“It has opened up my eyes,” Johnson said. “I’m a very creative guy, because I do a lot of weird stuff like sewing, designing my own clothes, building farm house tables, remodeling houses and drawing. These are things that I would just do, but after being at Fanatics and developing marketing plans and clothing designs, I saw that I could do these things professionally if I really tried.”

Dye, who after spending a couple seasons moving across the Buccaneers’ practice squad, injured reserve and active roster, accepted a full-time role as a Fanatics recruiter.

“All of the athletes who complete our externship know that if any of them are interested in joining us, Fanatics will figure out where they might fit in our organization,” Fanatics chief people officer Robin Eletto said. “We invest our time in this program, because we want folks to see us as a potential future employer, whether today or a couple years from now. We have such diverse functions that almost anybody could find something that is interesting to them.”

Eletto said Dye as a recruiter is exposed to every part of Fanatics’ business to identify his passions and given the flexibility to explore different avenues in football.

“I joined Fanatics on Aug. 6, 2018 and about two weeks into my training got called back to the Buccaneers to complete training camp,” Dye said. “I played with them for two weeks, then they cut me.”

After being cut, Dye faced a decision: focus on his career after football or give the game another shot.

“My receivers coach with the Bucs told me about a new league starting up that he knew some people in, so he made a call right after I got cut to one of the scouts,” Dye said. Dye pursued the opportunity and signed a contract with the AAF’s Orlando Apollos. Dye was “scared to tell Fanatics,” because he “didn’t want them to say they didn’t need me, because I’m playing football.”

Instead, Fanatics celebrated Dye’s decision. With the organization’s heavy recruiting season falling in December and January, Dye completed most of his work before leaving for AAF training camp in January 2019. When he took the field on Feb. 9, 2019 for the league’s first game, he had new fans in his cheering section: his Fanatics co-workers.

“I had 40 something people from Fanatics come to the first home game,” Dye recalled. “Eletto, (vice president of recruiting) Gordon Thomas, everyone from the externship, and people from the warehouse and corporate office came.”

Like Dye, D.J. White initially pursued an externship with Fanatics while signed to an NFL team. White, under a reserve contract with the Dallas Cowboys, was part of Fanatics’ 2020 externship class. Taking off the 2018 NFL season due to health concerns surrounding his then-unborn son, White, who studied business administration at Georgia Tech, realized he was unprepared for a career after football.

“I can only speak to my experience, but as an FBS Division I college football player, it was not possible for me to do any internships during my time at Georgia Tech,” White said. “I was taking classes year-round in an effort to graduate on time, as well as participating in team workouts, spring ball and of course the regular season.”

White realized navigating the job market would be tough.

“The hardest thing for me was being told I was either overqualified or needed more experience,” he said. “I had a college degree in business, so I wasn’t going to get a delivery truck job, but I didn’t have experience in what I studied.”

White, who desires to continue playing in the NFL and imagines working for Fanatics before attaining his ultimate career goal of owning a commercial real estate firm, has advice for college football players.

“If I’m at Georgia Tech, I am going to as many career fairs and talking to as many influential people as possible,” White said. “It’s really about who you know. Your network is really important. There is not a lot of time (for football players), but there is time. People want to talk to you, so you have to make the most of it.” 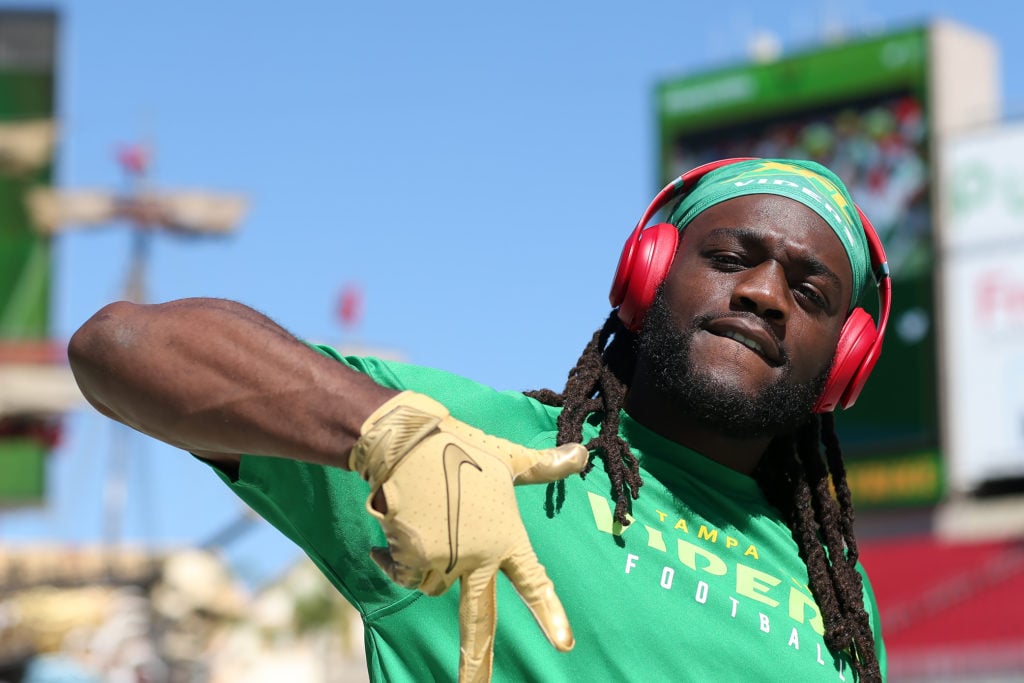 In early April 2019, Dye’s phone started ringing incessantly. Friends in the AAF were calling to say the league was suddenly shutting down. Players were being cut, and questions lingered over whether they’d be paid. Dye returned to Fanatics to work. But football came calling again, when he was drafted to the XFL’s Los Angeles Wildcats. He would later sign with the Tampa Bay Vipers, in the same city as Fanatics’ headquarters.

“I wasn’t sure about (the XFL), because I hadn’t heard too much about it before,” Dye said. “I didn’t want it to crash like the AAF did. But, I didn’t want to not explore my choices of getting back into the NFL.”

Once again this spring, Dye’s football career was cut short, when due to the COVID-19 outbreak, the XFL canceled its season last month. The announcement meant not only the likely end of Dye’s football career, but also a return to his career as a full-time Fanatics recruiter.

“Right now, I am 26 years old,” Dye said. “I have played five years of professional football, including three in the NFL. For me personally, I accomplished my goals on the football side of things. I played at the highest level and got a lot of information out of the game that I needed to. If the NFL doesn’t call, I need to get going on life.”

“This isn’t a one-and-done program,” Eletto said of the commitment the company makes to those who complete its externship program. “We are here for life.”